Apollonius of Tyana as a Contemporary of Jesus of Nazareth

By: admin
In: Travel 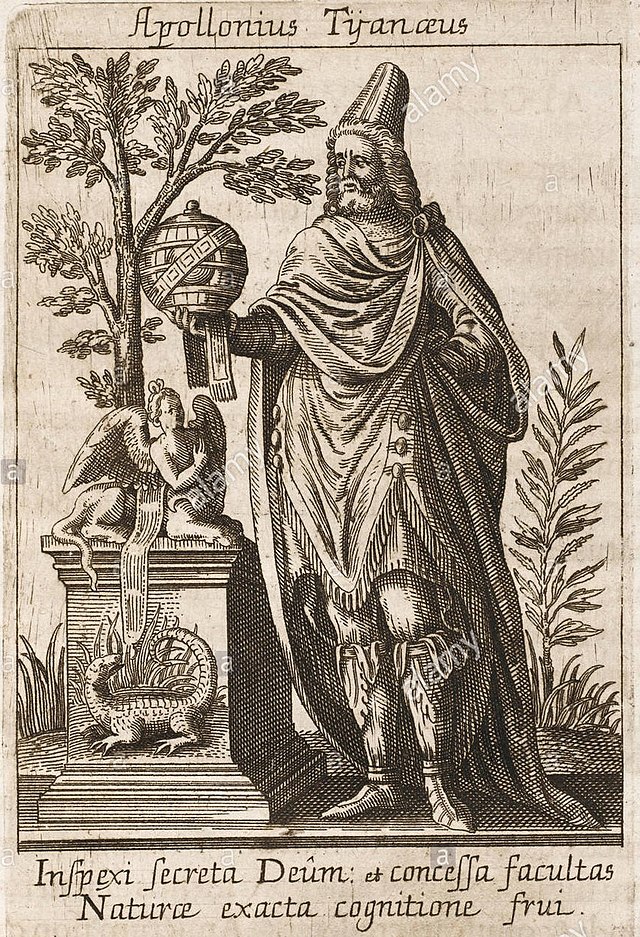 Apollonius of Tyana is a 1st century philosopher and orator. Apollonius’s biographer, a man named Philostratus, places Apollonius’s life from 3 BCE to 97 CE. Many scholars compare Apollonius to Jesus in that they both were “Messiah figures”.

Apollonius’ Story, According to Philostratus

If Philostratus can be taken seriously, Apollonius was a well-traveled man. Apollonius of Tyana stayed mainly in Greece and Asia Minor, bu talso traveled to Italy, Spain, North Africa, Mesopatamia, India, and Ethiopia. During his travels, he reportedly taugh philosophy and performed miracles.

The Emperor Nero (of Rome) had reportedly banned all philosophers from the capital city of Rome, and this ban remained after his death. In defiance, Philostratus sometimes went to Rome and spoke there to those who would listen. Later, in his later years, he was apprehended by Roman authorities and at his court trial under Emperor Titus Flavius Domitianus (or just Domitius), he was sentenced to death. Apollonius was accused of conspiring against the emperor, performing human sacrifice, and prophecying a plague. Philostratus also suggests that Apollonius ascended to heaven after his death.

The miracles were healings, prophecies, the ability to see events as they happen far away, and his heavenly ascension.

What Apollonius Believed About God

Apollonius’s god was very similar to deism, in that he believed that god couldn’t, or wouldn’t, be persuaded by prayers or sacrifices and has no wish to be worshipped by humans. Where Apollonius breaks rank with conventional deism is his belief that god can be reached through a spiritual procedure involving ‘nous’ (or intellect), because god himself is pure ‘nous’, and ‘nous’ is the greatest of man’s abilities.

In contrast, deism is the belief that a god had to have created the world, but is in no way interested in human affairs.

Allegations of Jesus of Nazareth Being Apollonius

The only similarities that can be drawn conclusively about both the New Testament and the writings of Philostratus is that the truth of their content is questionable. In the case of the New Testament, the Gospels were written anonymously (the names Matthew, Mark, Luke, and John were added much later) decades after Jesus; and Paul, the founder of the religion, wasn’t even in Jerusalem when the story of Jesus even took place. Paul was writing of a vision.

In contrast, Philostratus’s sources were a series of letters from Apollonius, of which scholars doubt their authenticity.Another of Philostratus’s sources was a diary from a companion of Apollonius named Damis. But, there are a few scholars who think the diary was an invention of Philostratus, or that it was a real book forged by someone else.This latter diary of Damis is probably the most valuable source of information for Philostratus. So, his writings depend greatly on whether this diary is authentic.

2021-03-25
Previous Post: Preservation and Smoked Meats: How Smoking Meat Can Prolong Food Storage
Next Post: The Greatest College Basketball "Program" Teams of the Past 50 Years