By: admin
In: Business 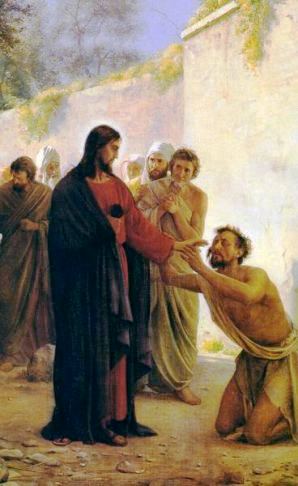 Christians today can discover important lessons for their daily lives in the response of the ten lepers to Jesus’ healing power.

Luke 17:11-17 relates the story of Jesus healing a group of ten men who had a disease affecting the skin, probably leprosy. When they called out to him for his pity, he told them to go to the priests. As they started in that direction, they were healed.

Nine of the lepers kept on going so the priests could confirm their healing. Then, they would be able to rejoin society. Only one leper turned back to Jesus to offer thanks.

In order to understand the lesson for Christians in a modern world, it is useful to know the background.

Status of These Lepers

In Jesus’ day, men and women who acquired this incurable skin disease were no longer able to live at home, but were displaced to the fringes of society. They might live in small groups on the outskirts of the villages and towns, depending on the charity of others for sustenance.

For the most part, it must have been a lonely life of despair and every increasing incapacitation. These people had to call out ‘unclean, unclean!’ to warn off anyone who might come near them. There was no hope of treatment, even to alleviate the suffering, let alone cure the disease.

The Healing of the Lepers

Obviously, this group of ten men afflicted with this terrible condition had heard of the miraculous healings Jesus had performed. It appears that they were prepared for his trip to their village. They did not approach Jesus as they were forbidden from going close to anyone, but they did call out, “Jesus, Master, have pity on us!” (Luke 17:13).

Jesus simply called back to them, “Go, show yourselves to the priests.” As they started to obey, they were healed.

Nine of the ten healed men kept on going, anxious to have the priests validate their healing so they could once again go near people. Only one returned to Jesus, “praising God in a loud voice” (Luke 17:15). He humbled himself at the feet of Jesus, offering profuse thanks.

All ten of these men must have had faith that they could be healed when they intercepted Jesus outside the village. Yet, only one man took the time to show his gratitude and he was not even a Jew like Jesus, but a Samaritan, usually scorned by the Jews of the time.

Why wouldn’t all ten men have been falling all over themselves to show their appreciation of this wondrous gift of a renewed body? They immediately looked better and felt better. Their lives were changed forever as they could now resume a normal relationship with their family and friends. The blessing bestowed on them was incredible.

There are a few possible explanations for their behavior.

Christian believers today have faith they are healed spiritually by the saving power of Jesus Christ. Some have experienced dramatic changes in their lives as a result of accepting Jesus into their hearts. For others, it has been a quieter, but no less significant turning point in their lives.

It might be spiritually rewarding for each professing Christian to examine the way in which s/he has responded to this healing, both at the time and since that precious moment.

It is hoped that each Christian today will understand that s/he, too, could easily be one of the nine who went merrily on their way to enjoy the benefits of an encounter with Jesus, without recognizing the obligations. Each day is the day to guard against carelessness and thoughtlessness in a relationship with Jesus. Each day is a day to offer praise and thanksgiving.